Marlene Cairney was once hard-pressed to choose between her affinity for art, colour, design and function, and her desire to spend more meaningful time with others – offering empathy, friendship and inspiration.

The moment came around the four-year mark of Cairney’s DynaLIFE career, which is in its 16th year. She was working as a histology technologist. Sitting across the table, Cairney gently touches her tawny hair, then her chin. Her eyes aren’t quite as wide as her smile, but it’s clear the memory of that time in her career is a happy one.

“Histology is very pretty; it’s more art than science. You’re trying to prepare a perfect, finished slide that should look just right as a finished product, and there’s gratification in that. Scrapbooking reminds me of that same feeling,” she says, referring to one of the crafting hobbies she enjoys. Making t-shirts with her grandkids also makes that list.

But as the slides left the lab – Cairney’s yearning to be closer to DynaLIFE’s patients and communities followed. She chased it, graduating from the lab in a patient care services role, which she held for five years before moving into her current role as a hospital and laboratory operations manager.

“I missed the community connection. I wanted that patient contact where you get to see the end result and its impact in the communities we serve,” she says.

Every time the word “community” moves across Cairney’s mouth – which is often – her head nods slightly towards her listener as if to say, “right?” A few times, she actually says the word. Small-town northern Alberta is in Cairney’s blood, and she’s passionate about DynaLIFE’s presence in such places and its role in people’s lifelong health care.

Cairney moved to Morinville from Valleyview with her husband when they were young. He was and still is, a Mountie. Cairney took on a role with DynaLIFE, drawn to the more regular work schedule.

“It was early hours, but it was Monday to Friday. We were a small family, and we both did shift work that was easier to accommodate things,” Cairney recalls of her and her husband’s choice.

The couple are proud parents of three children and have two grandchildren with a third on the way.

Serving the needs of northern communities in Alberta is a persistent and critical component of care offered by DynaLIFE. In recent years, people in these communities have dealt with tremendous adversity in the form of floods and fires.

As Cairney tells it, DynaLIFE’s ability to serve patients during such challenges is only possible because of the unparalleled compassion, sacrifice and determination of her team and the DynaLIFE family.

“I feel strongly protective of the people in those communities and of my staff. The level of service, and your health, should be the same in this province regardless of where you live,” she says.

Her northern pride is a testament to her rural roots and her intention to lead by making sure the people around her have the freedom they need to solve problems creatively.

“You have to be more creative in your problem solving when you don’t have all the resources of a big city hospital or major laboratory hub. How my staff deal with challenges, and their level of commitment – that comes from being part of the community. The stakes are higher, but it makes their work very meaningful,” she says.

“You need to be invested, no matter what we are doing. I’m invested in the communities we serve in making a positive difference. I see it as my job to be the voice for my team – to make their jobs better – and to be a voice for the challenges Albertans face in the north.” 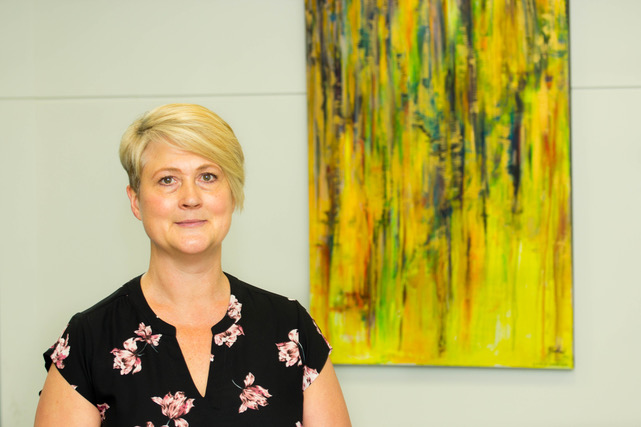